Hammock Dunes shares its 32137 zip-code with Palm Coast, its most western neighbor. Palm Coast is the largest city within Flagler County, located directly west of the Intracoastal Waterway with access to Hammock Dunes via the Hammock Dunes Toll Bridge. One of Florida's newest cities, incorporated in 1999, Palm Coast is a Florida paradise, situated on 70 miles of saltwater and freshwater canals and the Intracoastal Waterway and just minutes from pristine Atlantic Ocean beaches. Palm Coast was named by the Census Bureau as the fastest growing city in the country in percentage terms.

Lined with historic oaks, towering pines and indigenous vegetation, Palm Coast's parks and trails showcase the splendid elegance of the native Florida landscape. Bird-watching is popular at St. Joe Walkway and Linear Park, which are designated as Great Florida Birding & Wildlife Trails, and visitors can spot dolphins and seabirds as they stroll along the Intracoastal at Waterfront Park.

Palm Coast was conceived in 1969 when ITT Corporation bought several thousand acres of land in Flagler County to develop a massive Planned Unit Development (PUD) community. By 1990, the population had grown to 18,556, with the current population now exceeding 77,000.

Each section consists of roads beginning with a common letter of the alphabet. Thus, we often refer to an area based on that letter, i.e. the “P” section or the “R” section. The “F” section is built around a network of salt water canals with access to the Intracoastal Waterway. Palm Coast Parkway, the commercial corridor, is an east/west divided highway which allows more development frontage than a non-divided road. Residential roads in each section access feeder roads, which, in turn, access major traffic highways. This design limits the traffic in residential neighborhoods.

The City of Palm Coast is committed to developing and maintaining a strong economy by supporting the growth and development of new and existing businesses while creating an environment to attract new companies that align with our values. For more information about Palm Coast, please see annual reports below.

In accordance with its strategic economic development plan entitled "Prosperity 2021", the City offers many programs and services for both new and existing businesses. The Palm Coast Business Assistance Center offers business consulting services at no-cost to business owners and is conveniently co-located within City offices. In addition, through the City's partnership with the Flagler County Department of Economic Opportunity, the City can access many federal and state incentives for businesses looking to locate in Palm Coast. 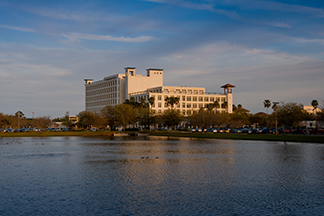 Each section consists of roads beginning with a common letter of the alphabet. Thus, we often refer to an area based on that letter, i.e. the “P” section or the “R” section. The “F” section is built around a network of salt water canals with access to the Intracoastal Waterway. Palm Coast Parkway, the commercial corridor, is an east/west divided highway which allows more development frontage than a non-divided road. Residential roads in each section access feeder roads, which, in turn, access major traffic highways. This design limits the traffic in residential neighborhoods. In 2002, the Florida Hospital-Flagler opened near the SR-100 and I-95 interchange. When Palm Coast’s population reached 50,000, retailers became interested. Palm Coast is served by three major grocery chains, a Super Walmart, Home Depot, Lowe's, Target, Kohl's, and Belk's. An ambitious 20 year project named Town Center broke ground in 2005. Town Center consists of over 1500 acres of mix use development, including residential, business parks, service, retail, restaurants, and entertainment. A SuperTarget Store opened in 2009. Other development includes European Village, Cobblestone Village at Palm Coast, City Walk, and Palm Coast Park. Cobblestone Village is anchored by a Belks department store and Lowe's, both of which opened in 2007.

Before 1969, land that eventually became the City of Palm Coast was considered by some as "a big pine-covered swamp." But when the corporate eyes of ITT/Levitt looked upon the virtually uninhabited land, they saw 22,000 acres of golf courses, marinas, oceanfront motels, scenic drives, and house lots awaiting the arrival of sun-seeking "pioneers." Marketing strategies targeting urban residents in the North and Midwest offered slices of land cut out of miles of forests, and soon a 500-mile infrastructure of roads, utilities, and sewer lines bound Palm Coast to a future that included becoming the largest planned unit development in Florida history.

ITT, which began as an international communications firm in the 1930s, provided the financial muscle to purchase large tracts of land and construct the infrastructure. Grand opening of Palm Coast occurred on October 29, 1970. The first public building, a Welcome Center, served as the hub for sales activities, and a 64-foot-high observation tower provided panoramic views of surrounding woods, lakes, streams, Intracoastal Waterway and Atlantic Ocean. It presided over a golf course, model homes, canals, and early home construction. Originally, visitors came from A1A to a small dock on the east side of the Intracoastal Waterway and proceeded by boat to the Welcome Center on the main canal. Prospective buyers were taken by elevator to the top of the tower.

Earliest "pioneers" occupied their homes in January 1972. From their start in 1969 until ITT withdrew in 1995, the corporation provided most of the services and leadership in Palm Coast. They had planned, built and maintained a model environmental community. In a unique private/government relationship, ITT financed Palm Coast's most necessary improvements. The interchange at I-95 opened in 1991 and, in 1988 the Hammock Dunes bridge opened.

As ITT withdrew from Palm Coast, the process of incorporation began, and on September 21, 1999, one week after Hurricane Floyd postponed the vote, 65.6 percent of the nearly 12,000 voters casting ballots opted to turn the unincorporated population center of Flagler County into a city. On December 31, 1999, residents of Palm Coast celebrated the end of a millennium and the beginning of their new city.

The Hammock DunesTM name, design, logo, and clock tower icon are registered trademarks of the Hammock Dunes Owners' Association (HDOA). Any use without the express written permission of the HDOA is strictly prohibited.
© 2014-2021 HDOA. All Rights Reserved.